While we are constantly bombarded with news of crises in every corner of the world – from tensions in the Ukraine to missing planes – it is hard to keep track of which events are affecting us right down to the so-called bottom dollar.

To simplify matters, here is a brief look at some of the occurrences and currency shifts that have shaped the markets in a rather eventful (and as always, unpredictable) way in the first quarter of 2014:

And now for the more mundane kind of updates…

It is also interesting to look at how the different asset classes are performing so far this year: 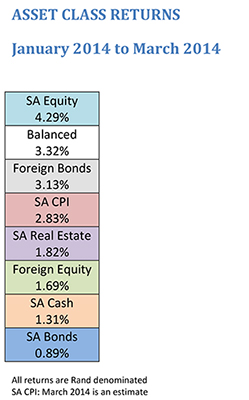 How Much Should You Withdraw from Your Living Annuity Each Year?
Looking Ahead at Markets and Inflation